All In: Redevelopment Strategies to Achieve Equity 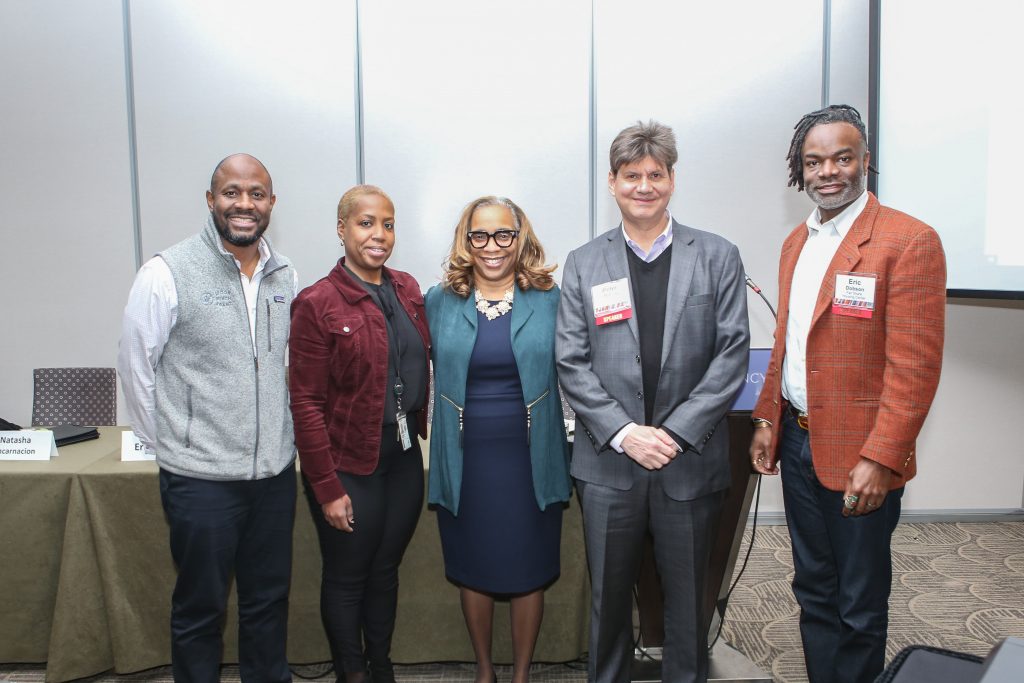 New Jersey is one of the most diverse states in the country, but, as Natasha Encarnacion, Assistant Director of Programs at the New Jersey Housing & Mortgage Finance Agency, points out, “you can be diverse and still have segregation.”

So how, then, do we combat segregation? The All In: Redevelopment Strategies To Achieve Equity panel at New Jersey Future’s 2020 Redevelopment Forum was unanimous: integration.

The decision of who gets to be our neighbor is not only determined by where we move. Rev. Dobson explained how, historically, federal and local zoning practices have been used to lock certain people—particularly people with lower incomes and people of color—out of high opportunity areas.

“The machinery of this country does everything possible to make sure black and brown folks don’t get ahead. That’s the purpose of housing policy, transportation, education, you name it. We know what the data says. We know the health determinants,” said Rev. Dobson.

The panelists agreed that the Mount Laurel doctrine was a step in the right direction to creating a pathway for people of lower-income brackets to achieve homeownership in communities that have historically kept them out. But creating opportunity and cultivating equity are not one in the same, and integration within the context of redevelopment is about more than affordable housing.

The solution is an uncomfortable one. “We’re still talking about the surface of things around diversity, but no, we have a serious issue around race. So how do we develop when we haven’t talked and haven’t had a real discussion about race in this country?” asked Rev. Dobson.

Now is the time to have that real discussion. Encarnacion shared that strong leadership and community engagement are two vital components to achieving integration, which she defines as communities where everyone who wants to live there is able to live there.

“We have people who have strong voices, and they’re loud, and they are able to make it difficult [for elected officials] to get another term, but if you step in and you do the hard work and you set the tone, and you get people to come along with you, then you can start building,” said Encarnacion.

Even before that building begins, integration should be at the front of everyone’s minds. Building a team of diverse community developers with diverse viewpoints will drive competition and ultimately result in a higher-quality, more affordable development. “It’s a pro-market dynamic in a lot of ways. When we talk about diversity in the market and is it a pro-market thing? I would say to folks ‘absolutely’,” said Karim Huston, Founder and Managing Member of Genesis Companies.

A diverse development team coupled with local leadership that values an engaged community can produce affordable housing that nurtures opportunity. Affordable housing carries a lot of stigma from the structure itself to the people who call places home. Encarnacion pointed out that the people who live in affordable housing are often people just beginning their careers, new families, or families where one parent works and the other takes care of young children. Most importantly, these are people who work hard and have aspirations.

“Affordable housing is for people who work every day of their lives, that want to pay their bills, that want to be somewhere comfortable and safe for their families and their kids,” Encarnacion explained. “If we start to work on resetting the narrative and changing the language that we use when we speak about redevelopment and integrated housing and stop using the buzzwords that usually turn people off, when we start to explain it, I think that people will understand it.”

Similarly, affordable housing does not mean cutting corners. “In many people’s minds, affordable design and affordable housing is something ugly, and that’s not the case at all,” said Peter Bafitis, Managing Principal of RKTB Architects. “Good design is good design no matter what level you’re building it for. Economical construction fosters a sense of security and creation of healthy living environments go hand in hand.”

Bafitis explained that, in addition to housing considerations, integrated communities are marked by mixed-use buildings with access to transit options. The bones for these communities are easily found in our urban centers where revitalizing existing structures, rather than building from scratch, to create mixed-use and mixed-income buildings will have a social and economic stabilizing effect.

Integrated communities are strong communities, and they can be achieved by embracing one of New Jersey’s strongest assets: diversity.

This summary was written by Missy Rebovich from New Jersey Future.

Beyond the Horizon: The Future of the State Plan