Planning for places and their people.

Mark Lohbauer began the session with a short presentation on the importance of economic analysis in modern redevelopment projects, emphasizing that “to have good economic development, you really have to have economic planning.” Lohbauer noted that malls historically recognized the importance of economic planning, but that towns in New Jersey traditionally did not, and that the retail found in downtown commercial districts therefore generally happened by accident. Using the redevelopment of the former Maplewood postal office site as an example of ensuring “growth by choice, not chance,” Lohbauer described the economic planning process to determine how the site could be best utilized for the town. Planning involved researching the economics of the town, interviewing merchants, and surveying the community. Through this process, Maplewood learned there were empty nesters who wanted to downsize their homes and remain living in the town. They wanted walkability, with access to transit, retail businesses, and restaurants. The town planned accordingly and a successful mixed residential and retail building was born on the former postal office site. 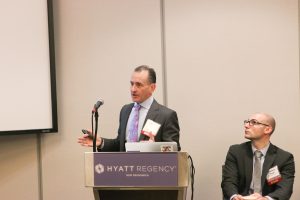 Not only does economic analysis provide for more success in redevelopment planning, but Patrick Terborg warned about the real risks of not utilizing economic data. Far too often, Terborg explained, stereotypes, perceptions, and biases take the place of data in development decisions, with an emphasis on race. Using the example of the lack of affordable housing development in many white suburban areas, Terborg noted that a simple economic analysis could actually show it is needed. He explained that many projects developers consider difficult are not challenging when economic data is available. Terborg urged developers to “start thinking about the humans” living in a community, pointing out that many communities have mixed incomes and a variety of needs developers should be considering. Joseph Mele also touched upon the issue of developers being wary of projects they perceive to be difficult, saying planners should do as much as possible to “limit the known unknowns.” Mele described various design and technical elements that should be considered during the planning phase of a redevelopment project, so that developers are not dissuaded by unexpected problems or expenses that could potentially arise. 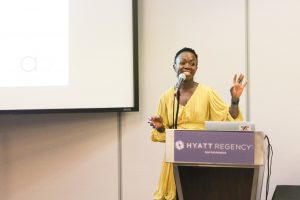 Adenah Bayoh spoke movingly in the session about her childhood as an African immigrant in Newark and her desire to give back to her beloved city. Bayoh echoed Terborg’s frustration that developers are not investing equitably in communities of color because of stereotypes and a lack of data. Like Terborg, Bayoh is trying to turn this around in New Jersey. She described one of her recent projects in Newark, a mixed-income housing development, containing both market rate and affordable rate housing in the same building. Naming development and housing as the “next civil rights agenda of our time,” Bayho warned “if we aren’t careful” in our planning “we will miss the mark.” Both Bayoh and Terborg spoke about the importance of designing for the needs of today’s communities, versus the way communities were designed decades ago. Bayoh emphasized the importance of community engagement in planning, stressing the need to know the community you are working with, and to build with them. As cities are rapidly being developed for millennials wanting walkable communities, Bayoh also stressed the need to be mindful about how we approach development, using redevelopment to make cities more equitable, not less so.

New Jersey Future is committed to smart redevelopment that puts places and their people first. From helping towns become more aging-friendly, to our dedication to community engagement, to our focus on equity and healthy sustainable communities, we know that redevelopment planning is so much more than just planning for a space. It’s about place and the people who will use it for generations, making it so very important to get it right.

This summary was written by Kelley Heck of Heck Public Affairs.