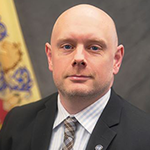 Sean leads and manages NJDEP’s internal legal team and serves as its general counsel on all matters of regulatory compliance and rule-making. He is also a member of the Commissioner’s executive team, providing input on priority initiatives that include climate change and environmental justice. Previously, Sean served as a Regulatory Officer with the Bureau of Legal Services and Stewardship for NJDEP’s Green Acres Program. He had joined that team in May 2017, after several years representing the program as its Deputy Attorney General. Sean received both his undergraduate and law degrees from Rutgers University.

Stronger than the Storm: Building the infrastructure we need for a changing climate