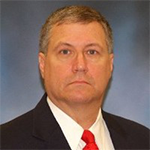 Thomas joined the Newark Downtown District in March of 2015. In this role, he manages a $2.1 million budget, and supervises the Ambassador team and the Horticulture team. Thomas routinely coordinates safety programs with the Newark Police Department and works with various City representatives to improve the quality of life in the downtown district. He previously served as Captain and Commanding Officer of the Intelligence Section at the New Jersey State Police, where he supervised 178 detectives in the areas of narcotics, gangs, weapons trafficking, counter terrorism, and public corruption.