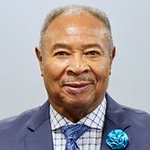 William Gallman was elected to his first term as the Fifth Ward Councilman in the City of Elizabeth in 2003 and he is serving his fifth four-year term. William was nominated by his colleagues for President of City Council four times. He is currently the liaison for the City of Elizabeth Office of Emergency Management. William is the former President of Local 399 for the County of Union, the Weed & Seed Program, and the African American & Haitian Coalition. William is an Ordained Deacon and Chairman of the Deacon Board for St. Paul’s Baptist Church in Elizabeth. William graduated from Gallman High School, South Carolina and attended Allen University, Columbia, South Carolina.

Taylor Ham or Pork Roll: Different perspectives on the hot issues in redevelopment