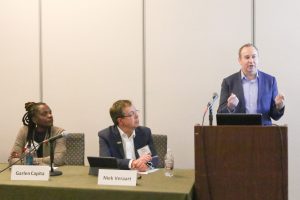 What Can We Do?

Andrew Salkin spoke about the importance of lasting change with regard to urban resilience, noting that “cities are a complex web of systems” and the “web” should be considered holistically in planning. According to Salkin, places that respond better to shocks like Superstorm Sandy are also places that respond better to everyday stresses. Beyond thinking about basic infrastructure investments, Salkin said cities should be considering the overlapping social, climate, economic, health, and leadership factors. Salkin also emphasized the need to have an “overarching vision” to ensure we are making current-day investments that align with our future goals and needs.

What Are We Doing?

Sean Moriarity presented a regulatory update on current resilience planning by the State of New Jersey. Calling New Jersey “ground zero for climate change,” Moriarity explained that sea levels and heat levels are rising faster in New Jersey than in most of the country and that New Jersey’s sea level rise is twice the national average. On the seventh anniversary of Superstorm Sandy last October, Governor Murphy signed Executive Order 89, creating a statewide climate change resilience strategy. This past January, the governor signed EO 100: NJ PACT, which takes a number of steps to protect the state against climate threats. Moriarity provided a summary of both orders and spoke about short and long-term action plans as two-fold: mitigating and reducing emissions; and adapting and protecting assets.

What Are Others Doing?

Garlen Capita presented a descriptive overview of the Gateway Master Plan in the Tampa Bay area of Florida as an example of smart redesign incorporating climate change and the future needs of the community. Capita explained that the Gateway area is experiencing sea level rise issues like New Jersey, that it is almost 90 percent built out, and it is experiencing rapid growth and transit issues. The county is relying on redevelopment to ensure that the area can maintain its competitive advantage as an economic hub and regional job center. The Gateway Master Plan includes the redevelopment of existing business campuses less vulnerable to climate change into mixed use campuses with access to transit. Capita explained how municipalities in the region are working together on funding the project, which has included a large and robust community engagement process to earn public support.

New Jersey Future is working to make New Jersey communities strong, healthy, and resilient. From working to improve New Jersey’s outdated water infrastructure, to helping coastal towns with their resilience planning, to advocating for healthy walkable communities, we know the ability of our communities to adapt to climate change and changing needs depends on the decisions we make today.

This summary was written by Kelley Heck from Heck Public Affairs.

Getting Incentives Right: The Right Tools for the Right Job