Former Governor of Maryland and current President of Smart Growth America’s Leadership Institute Parris Glendening delivered a powerful keynote address at New Jersey Future’s Redevelopment Forum 2020 on March 6, warning attendees that climate change and inequity are significant threats to the planet and are critically linked to the future of land use in New Jersey and everywhere. 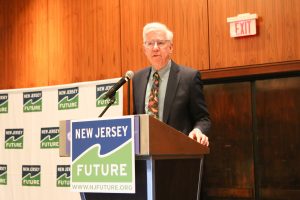 Governor Glendening at the 2020 Redevelopment Forum.

Glendening opened his remarks in New Brunswick to the crowd of more than 500 developers, planners, engineers, state and local officials, and land use advocates with a story about his days as a college student traveling between school in Tallahassee and his home in south Florida. Not considering himself an environmentalist at the time, Glendening spoke about watching the Everglades change before his eyes as they were developed 70 miles out from their once-protected edge. It was an “aha” moment for the governor as he realized that “something was clearly wrong. That was our water supply. That’s where we absorbed the storm surges.”

Years later, as a local official in Maryland, Glendening grew more and more concerned about sprawl and the need to preserve open space. He recognized the crucial importance of revitalization and investing in existing infrastructure, and ran for governor to protect the Chesapeake Bay and its precious ecosystem. Glendening was elected and served as Governor of Maryland from 1995-2003. While in office, he created the nation’s first state-level smart growth policy package, for which the governor received Harvard University’s Innovations in American Government Award. 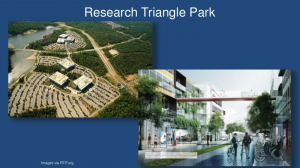 In his remarks, Glendening highlighted recent demographic trends indicating a shift away from sprawl as people today want more walkable and bikeable communities for living, recreating, and working. To illustrate the change, the governor used the example of the plan to transform Research Triangle Park in North Carolina from a sprawling suburban office complex to an urban, walkable, mixed-use district offering greenspaces, offices, residences, retail, and a light rail line.

Despite the benefits of an exciting shift toward redevelopment and land preservation, Glendening warned about the harsh reality of redevelopment’s inequitable effects, providing examples of entire communities being displaced and people’s lives made worse as a result of  revitalization. Emphasizing that relocating people costs them valuable money, time, and jobs, Glendening urged forum attendees to ask “does this policy reduce or expand inequality” when considering land use alternatives. The governor spoke about America’s rapidly disappearing middle class and noted that our “cities and towns are in danger of becoming home to only the very wealthy and the very poor,” citing the cost of housing as a major contributor to present-day inequities in areas like health and education.

Glendening also spoke about climate change as a second powerful force threatening redevelopment and the future of land use, noting that it has created a “constant need for mitigation and resilience.” The governor talked about sunny day flooding occurring regularly in his hometown of Annapolis and the many millions of people who will need to be relocated over the next decade due to flooding from climate change, including 18 million people in Bangladesh, India alone. On the hopeful side, Glendening stressed that we can address many current climate change problems through improving land use practices, like the greening of stormwater management, complete and green streets, walkable communities, and better transit systems.

As an organization fully committed to combating both inequity and the impacts of climate change as they relate to redevelopment, it was an honor to have Governor Glendening list so much of New Jersey Future’s current work as the smart solutions to combating these two major threats to our communities. From co-chairing the regional Waterfront Alliance Coastal Resilience Task Force, to our work on stormwater and green infrastructure, to promoting aging-friendly communities with affordable housing, to combating lead in drinking water, New Jersey Future has made it a priority to incorporate equity and resilience into everything we do. The time to confront future threats to redevelopment is today. We agree with Governor Glendening that “climate change and inequity are pulling our country apart, and they are guaranteed to get worse if we continue on the same path,” which is why we continue working for a more inclusive and more resilient New Jersey.

This summary was written by Kelley Heck of Heck Public Affairs.