Beyond the Horizon: The Future of the State Plan

New Jersey Future convened participants with a range of perspectives on and experience with the state plan for the Beyond the Horizon: The Future of the State Plan session at its 2020 Redevelopment Forum. A roundtable format was chosen so participants could talk through ideas and challenges while gathering audience feedback in real time. Donna Rendeiro and Edward McKenna moderated the discussion.

Participants in the roundtable session included:

New Jersey Future has been involved with the State Plan since the organization began as a way to halt a disturbing trend that had taken hold in the state: sprawl. The 2001 New Jersey State Development and Redevelopment Plan provided an effective framework to encourage concentrated growth in certain areas and preservation in others, participants agreed. But what are New Jersey’s current challenges, and how can a state plan best address them? 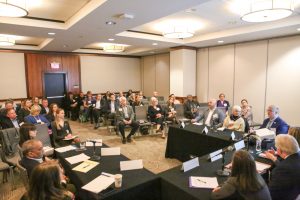 Beyond the Horizon: The Future of the State Plan roundtable session at the Redevelopment Forum.

At the time of the conference, four new members had just been added to the State Planning Commission (SPC), the body responsible for oversight of planning issues that affect New Jersey, and installed a new Chair. While there are still three vacancies, the SPC’s 12 members are more than enough for a quorum. Additionally, the Office of Planning Advocacy, charged with implementing the goals of the current state plan, has hired three more planners, who, in the short term, are working with the 95 municipalities with expiring centers designations. So far, work is underway in 62 of these municipalities.

The current state plan, a 360-page document, has been received differently among New Jersey’s 560 municipalities. While some have embraced it, many find it overwhelmingly detailed and do not have the resources necessary for full implementation. Harris noted that municipalities are interested in planning, but need help to do the level of planning required by the current state plan. Participants agreed that a new state plan needs to be more streamlined and address current issues, and, as Kennedy said, not “swing at the ghost of sprawl.” These issues include resilience, equity, and infrastructure, and were not incorporated in the 2001 document. The idea of using the framework of the 2001 document produced differing views, with some seeing it as a viable and efficient option and others seeing it as an exercise that would result in another exhaustively-detailed plan.

Participants and audience members noted that active outreach to local governments will be essential to the successful local adoption of the state plan. Lane explained that the Somerset County reinvestment framework was developed after years of meeting with municipalities to determine where the local goals overlapped with the county’s goals. The county plan was developed to reinforce and support local goals. The Office of Planning Advocacy should consider this sort of bottom-up approach when developing the next iteration of the state plan, an audience member suggested.

According to Rendeiro, the immediate task is walking the municipalities withexpiring centers through the process of redesignation, and updating the state plan will come later, suggesting that there is time to work out how a final product should look. 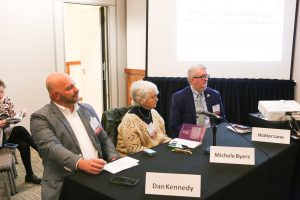 The greatest obstacle to local buy-in through the plan endorsement process is lack of resources. Harris noted that, as mayor of Chatham Borough, he readily engaged in the process of becoming a certified town in the Sustainable Jersey municipal certification program because the program offered templates for ordinances and other resources to help towns along. Rendeiro explained that the Office of Planning Advocacy is in talks with Sustainable Jersey to work out a way for towns to use certain Sustainable Jersey actions to count toward plan endorsement actions, where relevant. This could also help encourage towns to engage in the plan endorsement process who may not have otherwise. Esser suggested that the Office of Planning Advocacy develop a set of resources including model ordinances, best practices, and templates to take the financial pressure off towns.

Municipalities also need to be able to see what they will get out of this process, and the way to show them this is by organizing state agencies and their benefits, said Kennedy. Lane explained how Somerset County’s work with its municipalities enabled them to access grants and other funding sources because their plans were consistent with the state plan. In the absence of a statewide economic incentive program, these benefits could include points on competitive grant applications and priority access to Infrastructure Bank loans, among others.

In addition to working to streamline the plan endorsement process, the Office of Planning Advocacy and the State Planning Commission are working closely with the New Jersey Department of Environmental Protection to develop resilience measures that municipalities will be required to address as part of their planning efforts.

Any successful venture requires a strong vision and roadmap to get there. New Jersey Future believes that a state plan that prioritizes equity and resilience will make our state stronger and ready for the future.

This summary was written by Missy Rebovich from New Jersey Future.

All In: Redevelopment Strategies to Achieve Equity