Getting Incentives Right: The Right Tools for the Right Job

State and local government leaders and the business community agree on the importance of economic incentive programs, but the awards should be deployed strategically, to incentivize certain types of behavior and in certain types of places.

That was the upshot of the panel discussion in a session entitled Getting Incentives Right: The Right Tools for the Right Job at New Jersey Future’s 2020 Redevelopment Forum. 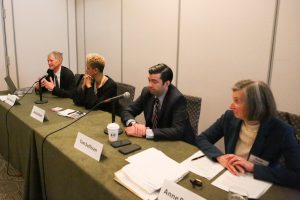 Getting Incentives Right: The Right Tools for the Right Job panel.

On the question of why New Jersey needs economic incentives at all, given its highly educated workforce, its proximity to major markets, and other characteristics that are naturally attractive to businesses, Sullivan summarized this macro perspective by first acknowledging, “you don’t need the world’s most generous incentive program when you’ve got the fundamental competitive advantages that New Jersey has.”

However, New Jersey’s positive statewide profile can obscure the challenges that certain kinds of projects can face in particular pockets of the state, much the same way that New Jersey’s status as one of the wealthiest states in the country (its median household income is second only to Maryland’s as of the 2018 American Community Survey) masks the fact that it contains some of the country’s poorest cities.

Economic incentives help get projects over the hump in areas with weak markets (low rents, high vacancy rates, high unemployment, etc.), or where the developer seeks to reuse an existing building or clean up a contaminated site – hurdles which might otherwise render the project unable to turn a profit. The incentives help close the financing “gap” between what commercial lenders are willing to lend and what it actually costs to get the project built. 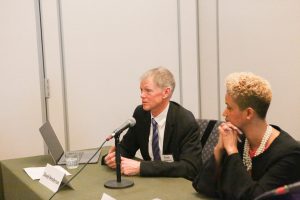 Henderson used his firm’s redevelopment of the Roebling complex in Trenton as an example. It involves the adaptive reuse of multiple historic buildings (the complex is where the wire rope for the Golden Gate Bridge was manufactured, among other things) in a rising urban market. Henderson notes that those buildings have sat empty for many decades and would continue to do so without incentives from the state to help defray the costs of rehabilitating the buildings for new commercial and residential uses. Soft demand would have made it difficult to recoup the rehab costs via market-rate rents.

The panelists agreed that historic preservation was just one of several goals that economic incentives can help promote. Revitalization of promising urban downtowns was seen as a goal in itself, especially in light of growing demand for “live-work-play” environments. If residential and job growth is now trending toward compact, walkable areas, it is in the state’s interest to help ensure those areas are ready to absorb the growth. Glover noted that, in addition to being where the market now wants to be, urban areas are also where you get more bang for your state-investment buck. This is thanks to infrastructure already being in place, along with the economies of scale that allow that infrastructure to serve many more people per unit cost than is true in more spread-out suburban developments. Incentives help get the ball rolling, and then revitalization can build on itself to the point where incentives will no longer be needed, such as in parts of Jersey City and Hoboken.

Henderson observed that “state governments made huge investments in facilitating suburban growth in past decades, via the construction of roads and other infrastructure. It’s not too much to ask for the state to now make investments to help urban redevelopment happen.”

It’s not just the big cities that should be targeted for incentives, though. New Jersey has many long-dormant smaller cities and traditional suburban downtowns where it makes sense for new growth to be steered. Babineau cited Garwood as just one of many examples of such smaller downtowns. Panelists agreed that it makes sense for residential projects to be eligible for incentives in these places, since this is where today’s workforce wants to live; job growth won’t happen if businesses aren’t confident that their workers will be able to live nearby.

“We should be looking for ways to maximize the potential of our suburban downtowns, especially if they’re served by transit,” Glover said. On the topic of transit adjacency, Sullivan added that “If you have a surface parking lot sitting adjacent to a train station with service in and out of New York or Philadelphia, you’re out of your mind.” Transit towns should be taking advantage of the market by doing infill projects on surface parking lots within walking distance of stations.

This summary was written by Tim Evans from New Jersey Future.