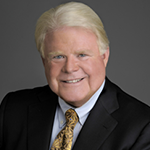 Edward McKenna represents more than 50 credit unions, banks, planning and zoning boards, businesses, major developers, and hundreds of private clients in his law practice. He has more than 20 years of public service as councilman and then mayor of the Borough of Red Bank. Under his leadership, the borough was cited numerous times as one of the best examples of a renaissance city by national publications including The New York Times, New York Post, Washington Post, and Smithsonian Magazine. Edward is the co-founder and past chairman of the Two River Council of Mayors. He serves on the New Jersey State Planning Commission and was its Chair until 2020.